We wanted to get away from it all, so we picked an “Off Peak” time to go to Lake Placid. Little did we know that this would correspond to the timing of the Great Arctic Blast of 2014.

We selected our room online, as we usually do. A King Bedroom for $129. Not too shabby! We loaded up the car, dropped Bailey at the kennel, and headed upstate.

The roads were not bad, as the temperature stayed about 34 degrees all the way up until we hit Keene Valley, just south of Lake Placid. I love this area in the summer, but driving through the twisty turns of the highway when the temperature dropped to 32 was a little dicey. Oh, and did I mention it was raining? Thankfully Mr. Porter had gotten the snow tires installed in the morning before we left town!

We arrived at the Crown Plaza, the hotel on the top of the hill, just up from the Olympic building and with a full view of Mirror Lake. Ah. We made it.

“You’ve been upgraded to a Deluxe King Suite,” the hotel worker told us. “It comes with a Jacuzzi tub and a fireplace.”

The room was located in the Adirondack Wing of the hotel. This section has a door that blocks it off from the rest of the hotel. When the door is shut, key card access is needed to enter.

The room was beautiful, with 12 foot ceilings, the promised fireplace, and of course a color TV.

We watched out the window over the next day while the snow came down. We went out for breakfast in the morning, and the thermometer in the car read 17 degrees. Brrr.

Later, hubby took a 2.8 mile walk around Mirror Lake. It was reported that with the wind chill factor, it was 3 degrees!

I should mention here, that the locals don’t mind the cold, and I saw several wearing shorts, others wearing no coats as they go about their daily business.

The big bummer for me was the pool was too cold. The sign said that they maintain the pool at 72 – 75 degrees, which is fine and dandy in August. When it’s 17 degrees outside, um, is it too much to ask to boost it up a little? Even the children were leaving the pool to jump into the hot tub! I asked at the front desk if they could increase the temperature, and they did a degree or two, put my old bones, (and bionic hip) couldn’t adjust to the temperature. Boohoo. Yes, I’m spoiled. Or old.

While walking down the main street of Lake Placid, we passed the movie theatre and saw the sign that they would have a special showing of Mockingjay Thursday night at 8 pm. Katniss!! Most other openings for Mockingjay were scheduled for Friday the 21st. We hit gold.

Thursday night, at exactly 7 pm, I went up to the movie window and said, “Two adults for Mockingjay please.”

“We don’t start selling tickets for that movie until 7:30. It doesn’t start until 8. It’s because of all the kids.”

Stunned, I took my money and backed up. What is she talking about? Is she afraid a kid won’t be able to see the movie because I bought my tickets first? Does she think I am going to be scalping tickets, because there are thousands of people who are going to line up in 17 degree weather and she wants the kids to get in first? Huh?

I muttered to Mr. Porter all the way back to the car. What was she talking about? I should have told her that I almost died two weeks ago, and I just had breast cancer surgery, and why is my $7 not worth as much as theirs, and I probably want to see this movie more than they do!

With my usual knee-jerk reaction, I said, “Let’s forget it. We can watch it when we go home!”

“Fine. But here, you take the money and you ask for the tickets.” I didn’t want to talk to the movie nazi again.

At 7:29 we walked back inside the theatre. The line was already formed, and Mockingjay tickets were selling like the proverbial hotcakes. Mr. Porter purchased two from the movie nazi.

We went inside, noticing there were only about 12 people in the theatre. More and more folks came in, but by 7:59, there were still an easy 100 seats empty.

The movie nazi made another appearance, this time inside the theatre. “Shut down all your cellphones now. I don’t want to have to walk through here again.” Well, I had to agree with her on that one. It is so annoying for a phone light to be in my face while I’m trying to watch the show.

Mockingjay was fantabulous. No big spoilers here, although I really loved the line, “And my sister gets to keep her cat.”  Also Philip Seymour Hoffman—who was my favorite actor—was in this movie. I believe he will also be in Mockingjay part 2, as I heard it has already been filmed.

So I got to see Katniss. I felt like a teenager myself, waiting for the next installment in the series.

I noticed that the guests a few doors down never left the room. I hope they’re ok.

Friday we had to leave to go home, but first we made a trip to the German Yum-Yum shop, where the display of muffins, cookies, and scones makes me drool. Hubby dropped me off while he went to park the car. When he arrived one minute later, I had already bought the chocolate-chocolate-chocolate yummy, and had it in the bag ready to go. The German guy told me, “It tastes best if it’s allowed to warm to room temperature before eating.”

“Thanks.” Ha. He obviously doesn’t know me. That yummy never had a chance to get to room temperature.

We drove back home, and the temperature was 34 degrees again. Downright Toasty. 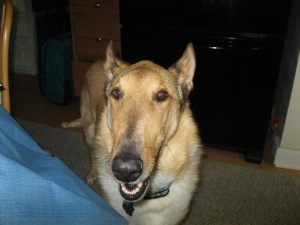 Bailey is glad to be home too!

2 thoughts on “The Arctic Blast, Katniss, and the German Yum-Yum Guy”