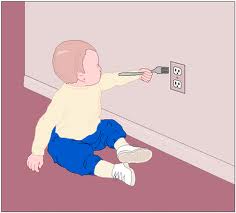 We had just moved into our new house in August of 1964, and I was 4 years old. The electrical outlets did not have covers yet. I was alone in my room, and for some reason decided that it was a good idea to stick a fork into the outlet.

The pain of the electrical charge embedded itself in my body. I was terrified. I knew that I was a really, really bad person. If I felt so much pain, it was because I deserved it because I was bad. I didn’t understand what electric shock was, or what caused it.

I hoped that my parents would not find out how bad I was.

I hid the fork and hoped that no one would ever find out my terrible deed.

Years later, when the Psychologist asked me for my first memory, I told him this story. “Why didn’t you run to your mother for comfort?”

“The thought never crossed my mind,” I replied.

“Most four-year-olds would automatically run to their mother for comfort. That’s really sad that you didn’t feel you could do that.”

2 thoughts on “My First Memory”