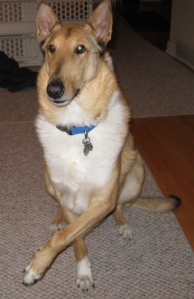 I wanted to find the thumb tack before my dog stepped on it.

I was arranging my bulletin board and getting rid of the 2013 calendar when a thumb tack fell to the floor.

I thought it was one of the white ones and assumed it would be easy to find on the carpet.

I knew where it fell, so I searched a 3 foot radius where it was likely to have landed after it ricocheted.

I couldn’t find it. I searched again at floor level.

I asked God to help and assumed I would be led to it directly, but it didn’t work that way. I looked around the room again.

I was about ready to give up because my mind was bombarded with thoughts:

“If you weren’t so clumsy you wouldn’t have dropped it in the first place.”

“God doesn’t care about you OR the thumb tack.”

“Why are you wasting God’s time with your little problems?”

“Maybe it really didn’t fall. Maybe you imagined it.”

Okay, I was ready to give up. It’s a small thing, and I could just get the vacuum cleaner and it would be over.

But I stopped a second.

These thoughts coming against me are the SAME thoughts that I battle in EVERY situation: when the money is low, when somebody gets sick, when the big problems show up. It seems like a mountain that I can’t climb or a wall that I can’t break through.

Then I decided to fight back. NO, it IS important to find the tack so no one steps on it. It doesn’t matter if it’s my fault or not. God WILL help me.

I went back to the spot that I heard it fall, and I started to feel through the carpet. Then I saw the dog gate standing there, and I thought that I could run it over the carpet, like knife smoothing frosting across the top of a cake, and the pin would emerge.

Almost immediately, the thumb tack clicked against the bottom of the gate. But it was clear, it wasn’t white, which is why it was impossible to see.

I had pushed through the wall in my mind. (Casting down imaginations, and every high thing that exalts itself against the knowledge of God, bringing every thought captive to the obedience of Christ  — 2 Corinthians 10:5)

Usuallyly, the thoughts bombarding me would have stopped me from pushing forward.

It’s a test. I have to push through the bombardment of lies.

So I found the thumb tack before anyone stepped on it.

Bailey did NOT step on the tack.

This is a photo of Bailey asking for a treat. And I gave him one.

6 thoughts on “God and the Thumb Tack”