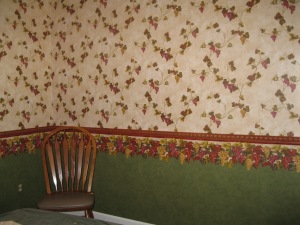 In the beginning, there was wallpaper. And the wallpaper was just fine with me and Mr. Porter (hubby).

Then came the Realtors who were going to sell our house for The Great Move To Boston, who told us to get rid of the wallpaper or we would never sell the house.

Then The Great Move to Boston didn’t happen, and we decided to keep the wallpaper.

Then we thought We Should Sell The House And Downsize, and decided to get rid of the wallpaper.

We got an estimate of $560 from a contractor who said he could remove the wallpaper and repaint the room in 2 days. We thought that was too expensive, so we said, “We’ll do it ourselves.”

“No problem,” I told Mr. Porter at the beginning of March. “I can scrape the walls, prime and repaint, and be done by the end of the month.”

[Life had other plans, but I was blissfully ignorant.]

I assembled my tools: a spray bottle filled with water and vinegar, and a wallpaper-removal-scraper-thingy. Don’t forget the butter knife.

And I began my quick and easy do-it-yourself project.

So I sprayed and scraped and scraped and sprayed. I started to rip down the wallpaper, some in big chunks, some just small pieces. One layer of paper came off; then I had to spray and scrape again for the second layer. As Mr. Murphy’s law would have it, I scraped too hard and had little scrape holes in the wallboard. Not to worry–this would be filled in later with putty. Oh no, that adds more time–I have to wait until it dries and then sand it, creating even more mess on the floor.

And so I did. But as I ran my hands over the walls, it still felt like sticky-glue.

So Ms. Professional cleaned and washed the walls, and told me that I had scrubbed too hard, and had taken the top layer of the plasterboard off in places, and that is why it is sticky. Oh, and that will be $150, please.

Next came the taping of the woodwork so the paint would not soak into it. Allegedly. (More on that later.) Also, plastic sheets for protecting the floor. Allegedly.

Then came two coats of primer. White walls looked better than the above mentioned wallpaper. I was tempted to quit at this point. White’s a color, right?

Okay, now it was time to pick the color of paint. I chose a light green for the top section, and a darker green for the bottom section.  I showed them to Mr. Porter, who decided he would like to make his own decision. I handed him the color swatches.

He chose colors just a tint different from the ones I chose. So good, we are in agreement. Forward, March!

I painted the top first, and surprised myself that I got one coat finished in an afternoon. I then painted the bottom. Next day, repeat.

I did it. I painted the room.

Oh, but it’s not over yet. I have to remove the tape.

Although I did go around the areas with a sharp edge, so that the tape would come off, there were still a few places where the paint came off with the tape. Yikes, now I have to touch up those spots.

There were also places were the paint ran past the tape, and I will have to scrape it with a utensil, er, butter knife.

I spent a day cleaning up the plastic which protected the floors, sweeping the old wallpaper, and vacuuming the dust particles.

So now the plastic is gone, the tape is gone, and I hung the curtains back up. I gave Mr. Porter strict instructions not to put any newspapers, bills, junk mail, bank statements or the like in the dining room. He shyly asked if it was okay to put the grandfather clock in there. What a nice guy.

So here are some pics of the new improved dining room. I will now be able to have friends over again to visit.

But don’t ask to see the other rooms…. 😉

And so ends The Great Wallpaper Removal Project of 2014.