I felt very sad when I heard the news today that Philip Seymour Hoffman had died.

Sad because he was one of my favorite all-time actors.

Sad because of the way he died– a heroin overdose.

When you get to the end of your life, it’s normal to look back and to see all that you have achieved. His awards and nominations for various roles over the years are many.

I remember when I first actually took notice of him. It was in the film “Owning Mahowny” in which he played a compulsive gambler who stole money from his job to play the tables in Atlantic City. It was based on a true story. That was the movie that I said, “Wow, this guy is a great actor!”

He floored everyone with his performance in Capote, and most recently got into the Hunger Games: Catching Fire royalty.

There’s a scripture that comes to mind: 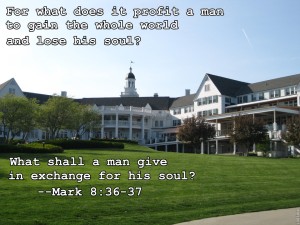 What does it profit him to win all these awards, when his children will now grow up without a father?

What good is it to be such a great actor, but to have something inside that is so painful that it yearns to be numbed with heroin?

It’s so sad to lose such a great actor to a such vicious thief.

Forever is a long time. We need to tell our family that we love them, because we may not be here tomorrow.