When telling a story, it’s best to start at the beginning, but if you can’t find the beginning just start in the middle. 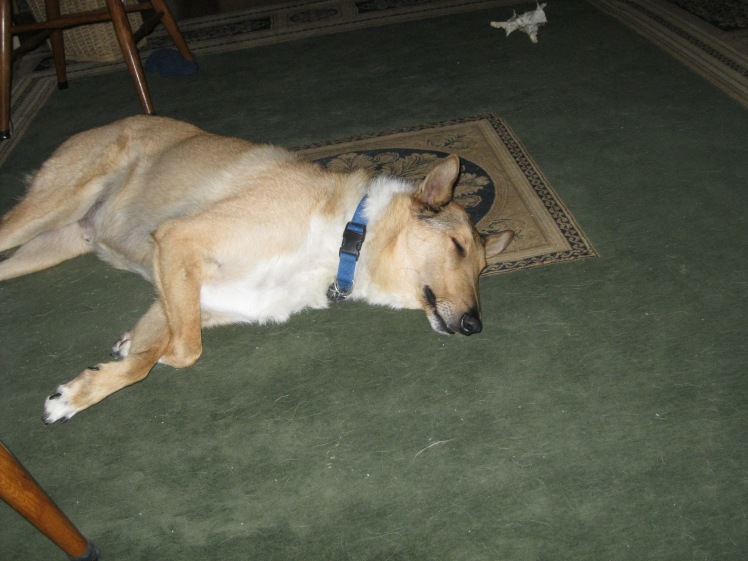 He’s not bored; he’s exhausted. It’s a lot of work shedding fur all over the rug. He wore himself out.

Last weekend I had an encounter with a homeless person and I had intended to blog about it. I wrote three sentences but was then pulled away on the next adventure. Here’s the short version:

Mr. Porter and I decided to spend the day in Saratoga Springs, or as the locals say, “Toga”. Saratoga is known for the Springs of water that bring forth both fresh and mineral water, and also the horse racing track. People with money are attracted to Saratoga especially in the summer. The main street has lots of shops and eateries. People are dressed nicely. They carry bagfulls and clothes, knickknacks, and jewelry.

I was surprised when a woman jumped in front of me holding a cardboard sign that read, “Homeless. Anything will help.” My first reflex was to ignore her and walk around her. Suddenly the compassion of God reigned down on me and I looked into her eyes. Her face was weather beaten. I couldn’t ignore this human being in front of me. Let’s call her Louise. I reached into my wallet and handed her $20, but that wasn’t the end of it. I started talking to her, asking about her situation: Does she have any kids? No. Did you ask for help at a church? Yes, they handed me a bag of potato chips. Have you tried the shelters? The ones around here are full, if I could get $60 I could stay at the motel up the street and at least get a show. Well, I don’t have $60 to give you. I really didn’t.

Sure, part of me thought this is all a scam to get some easy money, and who knows, maybe it was. But then again, how many of us could stand there all day and beg for money, being insulted and stared at, or ignored? That’s hard on the soul, to be rejected for hours at a time.

I asked Louise if I could pray for her, and she agreed, so I prayed for her right there, in the middle of the street, while people groaned that we were standing in their way and they needed to get to the next shop. I felt the presence of God so strong while I prayed for her, that it didn’t matter what these people thought of me. God was there, and He approved.

I searched my mind for answers, and then remembered that I have a friend from my Tuesday prayer group that makes little bags for the homeless with soap, toothbrush, toothpaste, etc. Maybe she would know what to do. I called and left a message. I told Louise I would find her later, that Mr. Porter and I had a few things to do in town and I would find her on the way back.

My friend called back and told me of a place that takes homeless people overnight and gave me their phone number.

By the time I got back to the main street again, Louise was gone; I couldn’t find her. But I felt that I had “passed the test” that God had given me.

The following week the TV news proclaimed that Saratoga is working to crack down on the homeless people that are bothering the tourists.  Panhandling.

I don’t know what their solution is, whether to arrest the homeless for bothering other peoples’ day out, or are they going to actually help them?

Our next door neighbors who live on the other side of the wall of our townhouse have moved out. We barely got to know them. Their landlady sold her other house and will be moving into the townhouse. I feel bad for them because they have only lived there a year and a half, and spent thousands of dollars on landscaping. I hope that they are happy in their new place, which has a swimming pool.

Mr. Porter and I have planned a short vacation to Lake Placid, but I will not tell you when we are going so that the burglars will not know when we will not be home. 😉 Of course there really is not much to steal here except Bailey’s fur.  Our last trip to Lake Placid was during the Great Arctic Blast of 2014 and you can read about it here.

I bought a new pair of sneakers and a new pair of shoes. For most Americans this is not noteworthy. Unfortunately, I have to take these shoes down to the Foot Doctor / Podiatrist and get a “prescription” so that they can put a “lift” in the right shoe because remember, my left leg is 1/2 inch longer than the right leg. Ugh. If I walk around for too long without the lift, my left bionic (artificial) hip area hurts. I have a few fake body parts, but I guess the deal is to be happy I’m still on the planet.

Mr. Porter is looking for a new job. He doesn’t like the job he currently has but thankfully there are lots of job ads out there and I’m sure he will find something better.

I got new business cards. I’m not really a business yet, but I am always looking for more readers and Twitter followers, so that when I finally do publish, I will be able to sell a book or two. 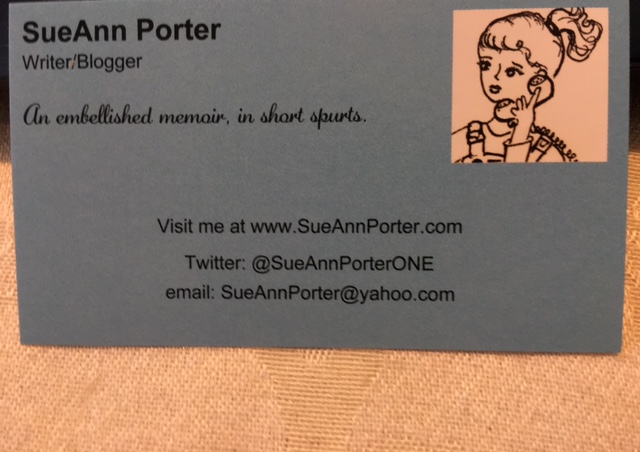 I am working on the first two chapters of “Arm Wrestling” and I hope to self-publish this year. My sister-in-law already did the cover for me. Keeping that picture in front of me has been helpful in reminding me to “write the vision and make it plain.”  Habakkuk 2:2

Well that’s the news from the Porter Household.

Have a good week, everyone.

4 thoughts on “Let’s start in the middle”