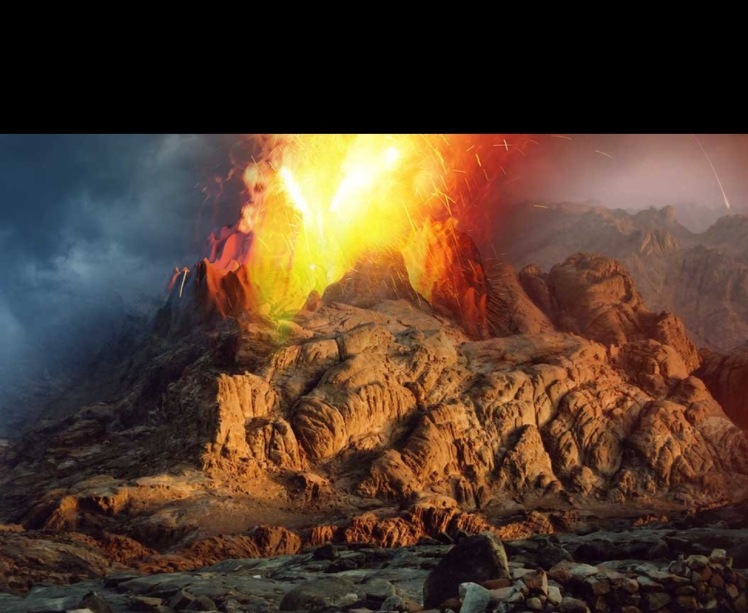 The Arm Wrestling continues in Exodus Chapter 19.  My comments in bold.

1 In the third month, when the children of Israel were gone forth out of the land of Egypt, the same day came they into the wilderness of Sinai.

They had been out of Egypt for three months, still wondering in the wilderness.
2 For they were departed from Rephidim, and were come to the desert of Sinai, and had pitched in the wilderness; and there Israel camped before the mount.

While in the desert of Sinai, they stopped and camped in front of the mountain.
3 And Moses went up unto God, and the LORD called unto him out of the mountain, saying, Thus shall you say to the house of Jacob, and tell the children of Israel;

Moses goes up the mountain to talk to God. God calls his people a “house” or a family, and refers to them as children. This is a loving Father, teaching His children right from wrong. Remember, the world and mankind are still in a fallen state due to Adam’s sin, and the Messiah has not yet come to redeem the people. This is why sometimes we have trouble reconciling “old testament” and “new testament” – the condition of the people in Moses’ time is under the curse of the law, not yet redeemed and under Grace.

4 You have seen what I did unto the Egyptians, and how I bare you on eagles’ wings, and brought you unto myself.

The Lord reminds Moses, “Look how I kept you safe, and brought you to myself, and punished the Egyptians, your enemies.”

5 Now therefore, if you will obey my voice indeed, and keep my covenant, then you shall be a peculiar treasure unto me above all people: for all the earth is mine:

IF YOU OBEY MY VOICE. We often like to pick out the promises of God, without also being aware of the corresponding conditions. Human nature.
6 And you shall be unto me a kingdom of priests, and a holy nation. These are the words which you shall speak unto the children of Israel.

If we obey His voice, He will make us special, a kingdom of priests unto himself, and  holy nation. IF we do what we are supposed to, HE will do what He promised.
7 And Moses came and called for the elders of the people, and laid before their faces all these words which the LORD commanded him.

Moses called for the elders, the men set in charge in the hierarchy of government we discussed in the last chapter. He explained to them all that the Lord told him to say.
8 And all the people answered together, and said, All that the LORD has spoken we will do. And Moses returned the words of the people unto the LORD.

And of course, they all answered that they will do everything the Lord has spoken. We do the same thing. When we are in the presence of the Lord, we think we can do anything He says, but when we get out the door, into the cold, cruel world, it becomes so much harder for us.
9 And the LORD said unto Moses, Lo, I come unto you in a thick cloud, that the people may hear when I speak with you, and believe you for ever. And Moses told the words of the people unto the LORD.

The sign of the Lord coming to Moses is a thick cloud, physical evidence of a divine encounter. I like to think of a big bright fluffy cloud. This is proof to the people that God has showed up. Moses then tells God that the people said they will be obedient to God. Now remember, God is omnipresent, and knows that the people already said these things, but God loves to have conversations with us, and talk about everything. So it’s a little redundant. Don’t you have the same conversations with your child or spouse over and over again? I rest my case.
10 And the LORD said unto Moses, Go unto the people, and sanctify them to day and to morrow, and let them wash their clothes,

Go to the people, clean them up, its dusty out here in the desert. Have them wash their clothes, and sanctify themselves.

11 And be ready against the third day: for the third day the LORD will come down in the sight of all the people upon mount Sinai.

Be ready on the third day. The Lord loves to use the illustration of Three Days throughout scripture. On the Third Day He will come down in the sight of the people at Mount Sinai.
12 And you shall set bounds unto the people round about, saying, Take heed to yourselves, that you go not up into the mount, or touch the border of it: whosoever touches the mount shall be surely put to death:

Set boundaries. There are places you are allowed to go, and things you are not to touch.
13 There shall not a hand touch it, but he shall surely be stoned, or shot through; whether it be beast or man, it shall not live: when the trumpet sounds long, they shall come up to the mount.

This sounds extreme to us: death by stoning or shot with an arrow!  Yes, this changed in the New Testament, with Jesus stopping the stoning of a woman caught in adultery. But in Moses’ time, there was extreme punishment for sin, to rout it out immediately, to put fear into others so they would not fall into the same sin.
14 And Moses went down from the mount unto the people, and sanctified the people; and they washed their clothes.

So Moses did what God told him to do and sanctified the people.
15 And he said unto the people, Be ready against the third day: come not at your wives.

Be ready for the Third Day.  Do not even have sex with your wife. Yes, this sounds strange to our modern ears.
16 And it came to pass on the third day in the morning, that there were thunders and lightnings, and a thick cloud upon the mount, and the voice of the trumpet exceeding loud; so that all the people that was in the camp trembled.

On the Third Day, God showed up in thunder, lightning, and a thick cloud on the mountain, and the voice of a TRUMPET, very loud so that all the people trembled. They have a healthy fear of the Lord.

17 And Moses brought forth the people out of the camp to meet with God; and they stood at the nether part of the mount.

Moses brought the people to meet with God, just as he had been told. They were careful to observe the boundaries!

18 And mount Sinai was altogether on a smoke, because the LORD descended upon it in fire: and the smoke thereof ascended as the smoke of a furnace, and the whole mount quaked greatly.

Mount Sinai was covered in smoke, because the Lord showed up, just as He had promised. He descended on the Mount with fire and smoke, like the smoke of a furnace, and the mountain quaked. There could not have been any “unbelievers” in the crowd at this point, in my humble opinion.
19 And when the voice of the trumpet sounded long, and waxed louder and louder, Moses spake, and God answered him by a voice.

The Lord came down to Mount Sinai, but stayed at the top, and called Moses to come up to the top to meet Him, so Moses went up. The other people stayed behind.
21 And the LORD said unto Moses, Go down, charge the people, lest they break through unto the LORD to gaze, and many of them perish.

Then the Lord told Moses, “Remind the people of the boundaries that I set up, so that they don’t break through to gave upon me, and many will perish.” Moses was the only one at this point chosen to get this close to God. The others were welcome to stay nearby, but to stay within the assigned boundaries.
22 And let the priests also, which come near to the LORD, sanctify themselves, lest the LORD break forth upon them.

Even the priests had boundaries.
23 And Moses said unto the LORD, The people cannot come up to mount Sinai: for you charged us, saying, Set bounds about the mount, and sanctify it.

Moses says, “But they can’t come up. You already told them that.” They know better.

This reminds me of the eclipse the other day– it was tempting to look at, but don’t do it!
24 And the LORD said unto him, Away, get you down, and you shall come up, you, and Aaron with you: but let not the priests and the people break through to come up unto the LORD, lest he break forth upon them.

Ah, but do they really know better? Think of the temptations we have to look at car accidents when we are driving on the road, and should be concentrating on the road ahead of us. Human weakness.  “Moses, go remind them again.”

25 So Moses went down unto the people, and spake unto them.

So Moses goes back down to the people, and reminds them, they are not to come up to where God is.  Remember that old commercial, “Stay within the lines, the lines are our friends”? Boundaries are to keep us safe.