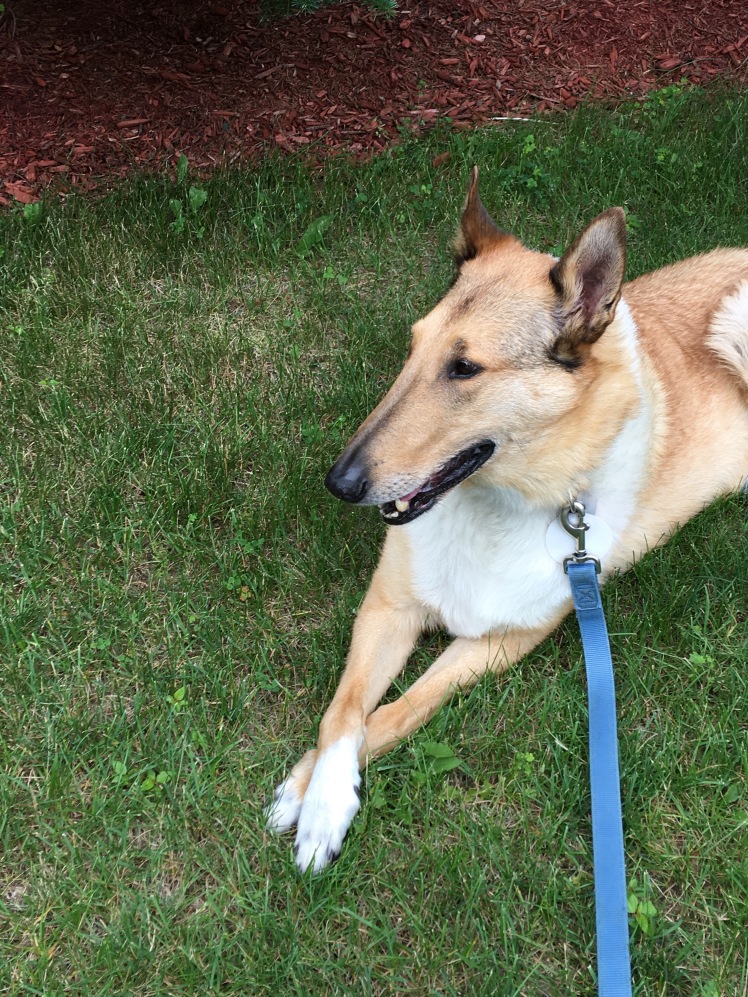 As you know, my dog Bailey was attacked by a Bull Dog last week. The physical symptoms are of one category, but the emotional trauma is many layers deep.

I have tried to write this scene down, and I have scribbled notes in a notebook, did my usual typing in the offline computer, interspersed with computer Solitaire, to get both sides of the brain working; even a few run-on sentences. (See what I did there.) On the computer, in the notebook. Lather, rinse, repeat. I still don’t have this narrative on the page as I would like. But that’s okay. It’s a lot to digest, and it will take more than a day or two to get it into flawless prose. In fact, it’s almost been a week and I am no where near having this in the form that I want it.

Every night since this incident occurred, I start to drift off to sleep and I see the top of that dog’s white head as I try unsuccessfully to get that dog to let go of Bailey. I tried hitting it, yelling, and even tried to pry his teeth off of Bailey (yes I did) as Bailey screamed in pain while this dog had his jaws clamped on Bailey’s ear. I yelled, “HEEELLLLPP” several times at the top of my lungs (cliche’) as I ran out of options. I confess I didn’t think to pray. Is that bad?  I confess that yelling for help is a new tool in my box of survival skills. Up until that point, I have never used it; I never even knew I had that ability. So maybe that’s a step forward in personal development after all.

I didn’t care that if the dog let go of Bailey, he might bite me. I never even thought about it. It was more of a protective instinct thing, where I was trying to protect someone and didn’t care what happened to me. Weird, I know. More like a mother-child than an owner-dog thing.

I have not felt so helpless in a long time. And I hate that feeling. No hope, no help. Stuck in what seems like forever, waiting for the moment to end, listening to my puppy-dog scream in agony, and not being able to stop it.

When it was all over, the dog had let go of Bailey, and I was holding the bull dog by the collar. I’m not sure how that happened. I don’t remember grabbing his collar, but obviously I did.

While friends and family comment, “At least the dog didn’t bite you,” and I should be grateful, what the dog did to me was expose a terrifying place of existance: Helplessness. The path that leads to a hollow space inside of me that still exists. A place of a thousand childhood memories that still burn. No hope, no help, no friends live there. That dog ripped that place open inside of me and exposed it to the light.

There’s a few places to go with this…one is to keep rewriting and use it for my character, George, in my novel I am working on. (Working Title: Scraps of Paper. Yes, I will rename with something snappier.) He will be in some places where he will be hopeless and helpless, and now I know how that feels in full detail. With more work, I hope to get this written in smooth, readable language, novel-reading worthy.

Meanwhile, I have bought some pepper spray to carry with me on walks. If/when a dog or person attacks, I can give them a quick squirt in the face and be on my way. It does not do permanent harm, just enough to stop them.

Because I am determined that this never happens again.

9 thoughts on “Rewriting and Never Again”